In 1934 the Brighton Baths on the Esplanade at Middle Brighton were destroyed by a storm. They were rebuilt in 1936 in a stark Moderne style and soon became a landmark, providing safe sea bathing for the local community.

The cream brick building is symmetrically composed with a central double-storey pavilion and single-storey wings projecting on either side. The building is an excellent example of the Moderne style and is typical of the work of the noted architectural firm of Oakley & Parkes.

In recent years we have watched with dismay as this classic building deteriorated and fell further into disrepair. The Bayside Council owns the building and made it very clear that it was not prepared to commit the considerable funds needed for its restoration.

When the Council announced its intention to re-lease the building to a potential developer, our preservation antennae started to twitch. ADS Honorary Preservation Officer Cliff Skinner maintained a watching brief over the leasing process, and prepared a report for submission to the Council’s planning process.

Realising that the proposal represented the best chance for the restoration of the building, the ADS report gave qualified support to the plans, but requested modifications to ensure that the architectural integrity of the building was retained. The matter came to a head at a recent Council meeting when the go-ahead was given to the proposal, subject to a number of changes, including those requested by ADS.

Restoration will be overseen by a heritage architect. We are delighted with the outcome and are confident of a sympathetic restoration of this important Deco building. 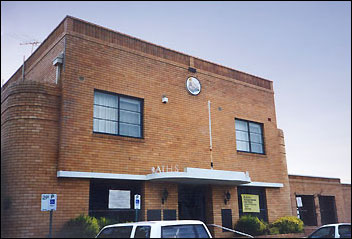