After a decade-long battle to preserve the Capitol building, demolition has commenced on this prominent South Yarra corner. The building started life as one of Melbourne’s cable-car engine-sheds before being converted to a bakery in 1936 after the trams were electrified. The makeover was designed by prolific local architect Harry Norris. The massive development of apartment blocks in South Yarra has claimed a number of interwar buildings, but none as prominent as the Capitol building. 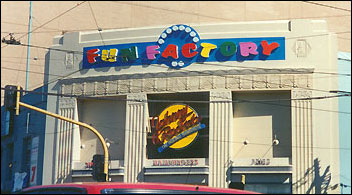