The former cable-car tramway system is a major part of Melbourne’s rich history. The system was replaced by electric trams during the 1920s, but the majority of the buildings that housed the trams (and the cables) remain standing, albeit re-used for other purposes. A number were re-modelled extensively in the 1930s – promient architect Harry Norris created a car showroom (now converted to the Royce Hotel) and the Capitol Bakery in South Yarra.

A third, on the corner of Brunswick St & Victoria Pde, Fitzroy, became a storage and distribution centre for Penfold’s Wines. It is the sole example of Moderne architecture in a predominantly 19thC precinct, making it a rarity in this part of Fitzroy. It also demonstrates the application of the Moderne style to a commercial building – including subtle decorative features e.g. wave-like border at roofline, fluted mouldings at the front door, and the inclusion of the tower facing Victoria Parade. Unfortunately, the neon signage was lost many years ago. In recent years it has been used as a bicycle factory but it has been acquired as the site for a proposed 14 storey office block.

ADS has joined with the City of Yarra and local residents in opposing the development, on both heritage and planning grounds. 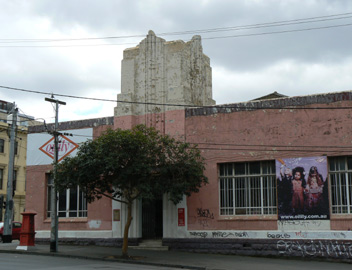