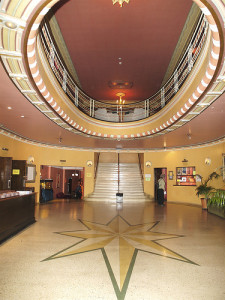 In the last issue we reported on possible problems with the future of the iconic 1936 Astor Theatre in St Kilda. Numerous rumours were circulating about it possibly being sold by St Michael’s Grammar School, perhaps to a ‘white knight’. This turned out to be correct. In August 2012, St Kilda businessman Ralph Taranto bought the Astor for an undisclosed sum believed to be less than the $3.8 million St Michael’s paid for it at auction in 2007. He intends to leave the running of the cinema in the hands of George Florence, the man who has run the business since 1982. When asked if his intention was to keep it as a single-screen cinema, Mr Taranto’s reponse was simple: “Oh God yes. I wouldn’t buy it otherwise.” ADMS fully supports the retention of the Astor in its current form.